Thailand is home to two species of bear, the Asian Black Bear (Ursus thibetanus) also known as the Moon Bear, and the Malayan Sun Bear (Helarctos malayanus) also known as Honey Bear.
That seems easy enough!
However, to make things ‘easier’ for identification: both species are black, both have a light mark on their chest, and both bears pretty much share the same habitat and range in Thailand. In other words these two bears are the perfect contenders for this “What’s the Difference?”-category. 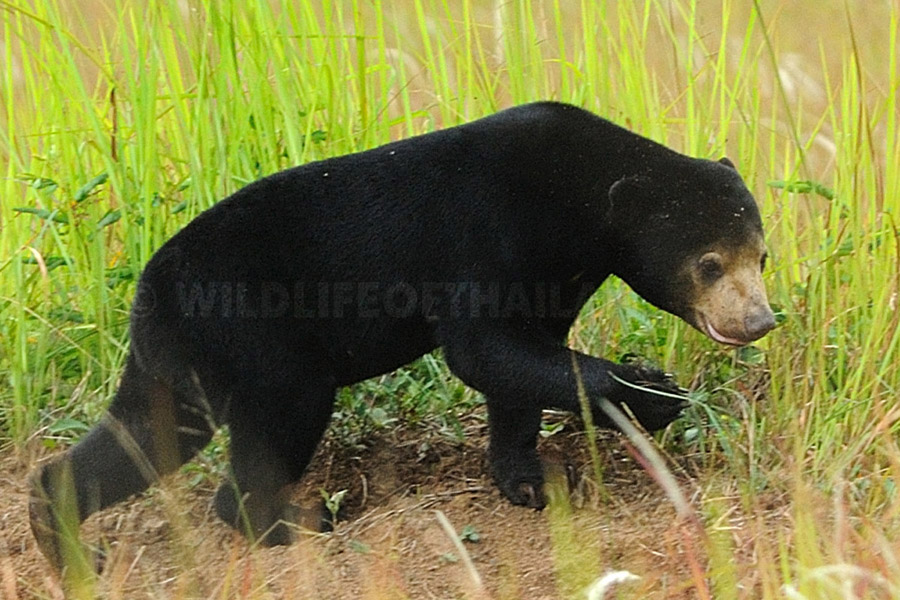 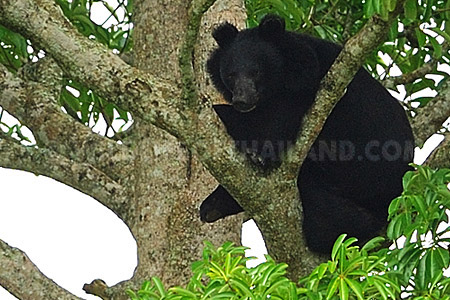 These bears are some of those animals that as soon as you get more familiar with them, you’ll find out the difference is pretty obvious. But when you are new to this region, and not visiting zoos every month, it can be tricky especially because there seems to be very little info online that specifically tells you the differences. Therefore I decided to create the page that I would have wanted to find when I first tried to get familiar with the two Thai bear species.

I have to add, getting some decent images in the wild has been quite a task. Even some of the half decent older images are noisy due to low light conditions and often cropped from a not too high resolution image. An encounter with a bear in the wilderness of Thailand is quite rare; Both species are listed as Threatened – Vulnerable on the IUCN Red List. And on most of my encounters, they did not wait for me to get my camera ready and in focus, or light conditions in the dark forest were too poor. Running after them to get a better shot, did not exactly seemed a wise thing to do either. So most of the sightings I did not get any usable shots at all. Equipped with long claws, a bear could do you serious harm. Though, never was I chased or attacked by any of these two species. Only the very first Asian Black Bear I have seen in Thailand actually roared at me and my friend. It came down from the tree it was in, which was for us the sign to back off. It did not come after us.

A couple years ago, a Sun Bear in Kaeng Krachan became a bit more habituated to people and started to feed off the food scrapes left behind by the park rangers near the restaurant of one of the camp grounds. So a couple of the shots on this page are from that period, because apart from a reasonable full body shot in the grasslands of Khao Yai quite some years back, somehow all other Sun Bear encounters I had in the forests did not deliver any reasonable images.
Seeing the ‘camping bear’ many times, did reduce the charm of a Sun Bear sighting. Usually I would consider it a good year if I saw one or two in a year, but that average got totally skewed when this bear started showing up regularly. Even though still cool to see, it was certainly not as exciting as meeting one in the middle of the jungle. But on a positive note, I finally got some better images. 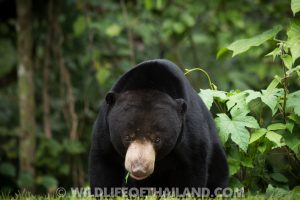 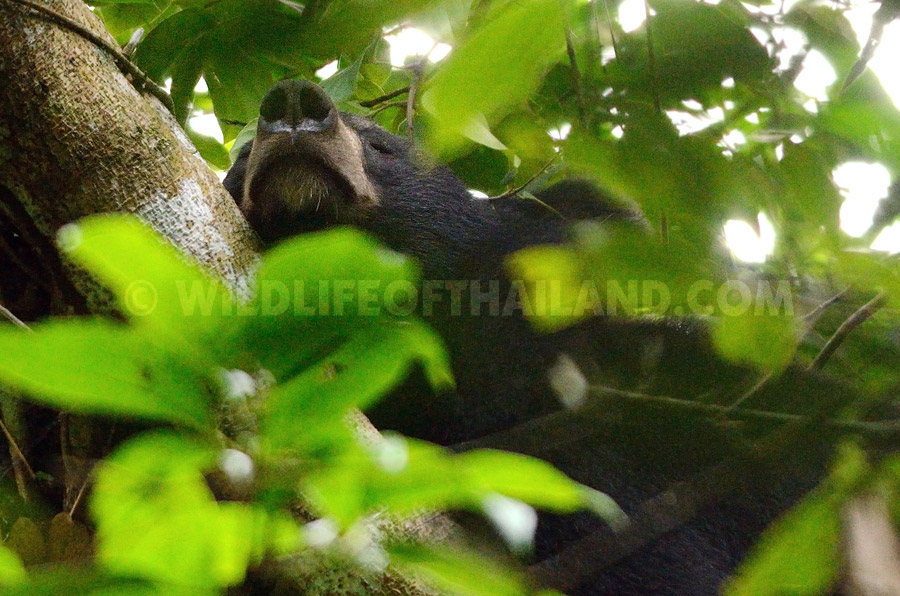 The muzzle of an Asian Black Bear, Ursus thibetanus sleeping in a tree in Khao Yai national park

The coloration of the muzzle is variable, sometimes a bit darker in the Asian Black Bear. Though, in the image on the right you can see the coloration of the muzzle can be quite similar to that of the Sun Bear.
Some individuals of the Asian Black Bears can have blond fur e.g. on their faces and parts of their bodies. These are sometimes called the Golden Moon Bears. I have yet to see one, so no picture of this… yet… 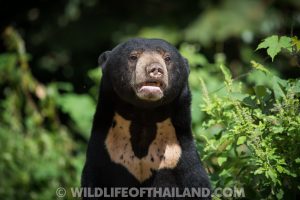 In most cases the Asian Black Bear has a V-shaped cream/ white mark on its chest, while the Sun Bear usually has a U-shaped marking (see image on the right). In the Asian Black Bear the V-shaped mark almost extends to the shoulders as seen in the image of the two cubs in the tree, whereas the marking on the Sun Bear does not extend that far. Anyway, in most of the encounters I had in the wild, it was not possible to see the marking at all. So the head shape and ears, together with the fur are likely more usual characters for identification in the field. 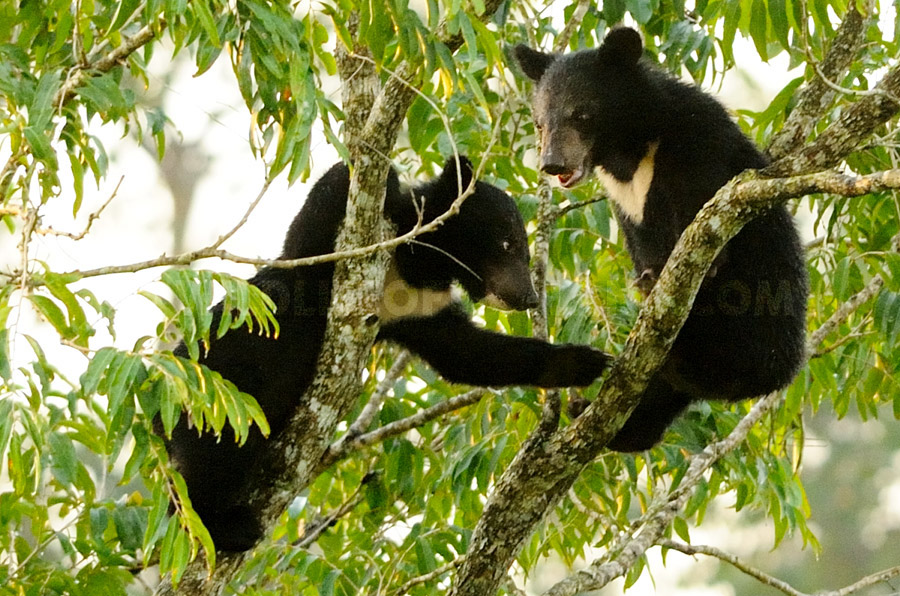 Asian Black Bear cubs (Ursus thibetanus) playing in a tree. The characteristic v-shaped marking extending towards the shoulders is clearly visible, as well as the shaggy fur and rounded ears typical for this species.
Another amazing bear encounter in Khao Yai!

Another difference that is slightly visible in these images is the fur. The Malayan Sun Bear has a smooth coat, while the Asian Black Bear has a more shaggy fur. 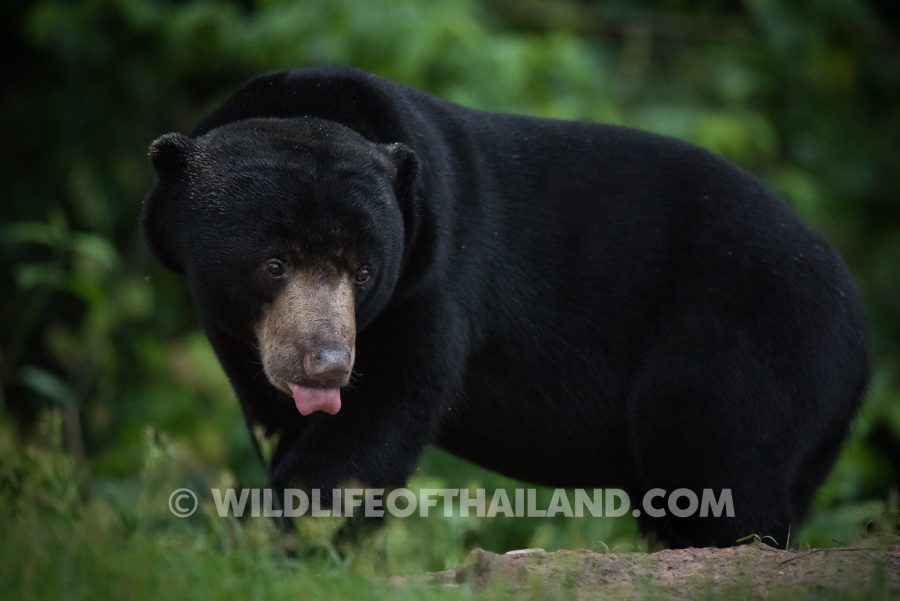 Sun Bear (Helarctos malayanus) showing its smooth fur coat and its pink tongue which is actually a lot longer than shown in this image. Seen in Kaeng Krachan national park, Thailand

There is a significant difference in weight & size. Average weight of the Malayan Sun Bear, the smallest of all the bears in the world, is about 40 – 65kg, though some can reach up to 80kg. The Asian Black Bear is quite a bit larger, with average weight 80 – 120kg, and sometimes even over 150kg.
Body length of the Malayan Sun Bear is about 120 – 150cm long, Asian Black Bear reaches 120 – 190cm.
However, judging the size of an animal in the field, is not as easy as one might think. The adrenaline blurs the mind 😉 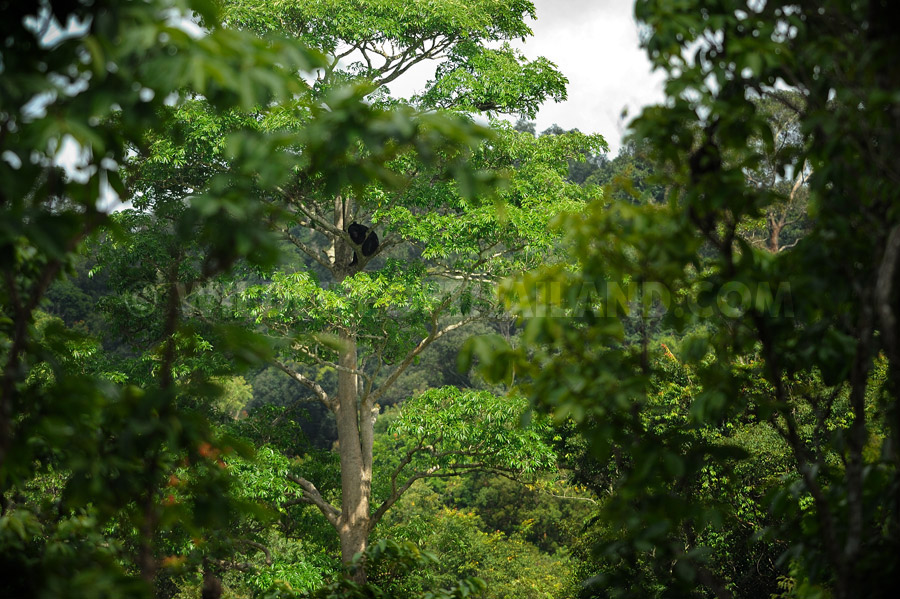 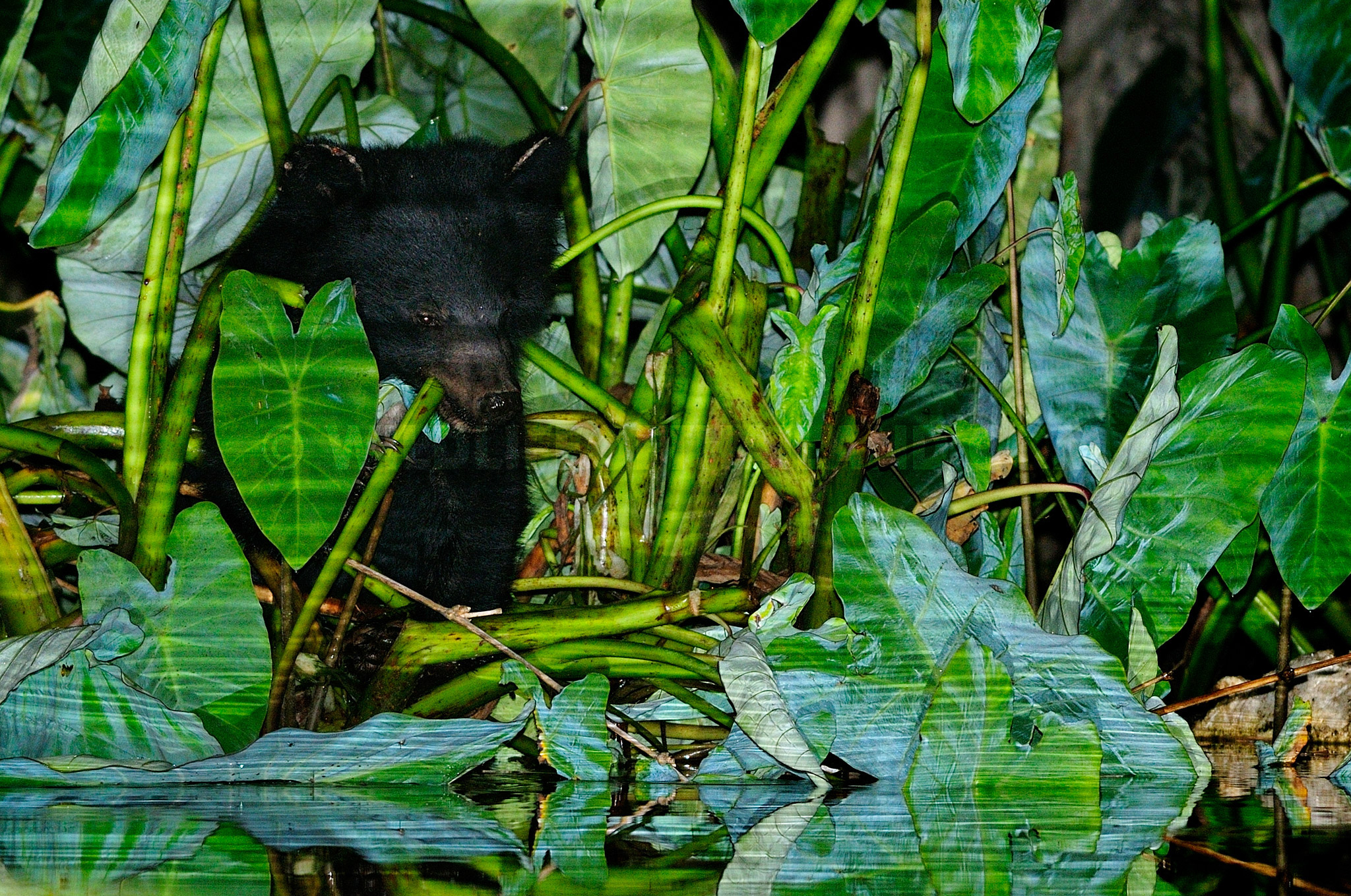 I have seen bears at any time of day, even a couple times around noon, which usually is not considered a great time for wildlife watching. Though, from my personal experience, chances to see either of the two bear species increase in the late afternoon. Most of my sightings have been while visiting Khao Yai national park, hiking in the evergreen forests or sometimes open savannahs with small patches of trees during the last daytime hours, 16:00 – 18:30. However, like the image above, the bears are around the whole day, but often resting high in trees or in tree hollows. And I think most of the time they pick trees in dense canopies where they are not as visible as in the image, above.
The presence of bears can be easily noticed based on the claw marks on trees.
For the Asian Black Bear, Khao Yai national park seems to be one of the best places in Thailand. For Sun Bear I think Kaeng krachan has a slight edge over Khao Yai. So far, I have never seen an Asian Black Bear in Kaeng Krachan, and they are not often camera trapped there either.

Wish you the best of luck with spotting the bears in Thailand, and if you are in doubt of which species you have seen, don’t hesitate to ask more questions in the comment section, below. If possible with pictures.