In the past, I would always say that I would never buy snake tongs. The few experiences I had with them, did not get me excited at all. In my opinion, it causes the snakes to get more stressed, and the chance of a snake getting harmed during a capture seems likely to me. But when I planned to order a snake hook from Midwest Tongs, I asked a fellow field herper if he wanted me to order anything for him. He was interested in a proper snake tong. So we did some research on the Midwest tongs website and noticed the Gentle Giant Tong as they call it. I really liked the idea of the wide grabbers. My past experiences had been with narrow grabbers that would more likely cause harm.
Anyhow, my friend decided to order this Gentle Giant Tong, and therefore I got to play with it a bit as well.

Testing the pressure of the tong’s jaws. Feel what the snake feels.

The exact version he ordered is the Midwest 40 inch Collapsible Gentle Giant Tong with “Super Tong”-option.
Not a cheap piece of kit, and sending it to Thailand was even more costly, including the import duties and VAT. I was impatient so did not ask for a cheaper/ slower shipping option. But good lesson for a next time.
Anyhow, when you get this piece of kit in your hands, you feel it is worth all the money.
You can feel that it will last for a lifetime.
The handgrip felt better in my hands than other tongs I had used in the past. And while simply putting my finger between the grabbers and squeezing the handles, I was pleasantly surprised that it did not hurt at all but at the same time it is surely tight enough to prevent a snake from getting away. 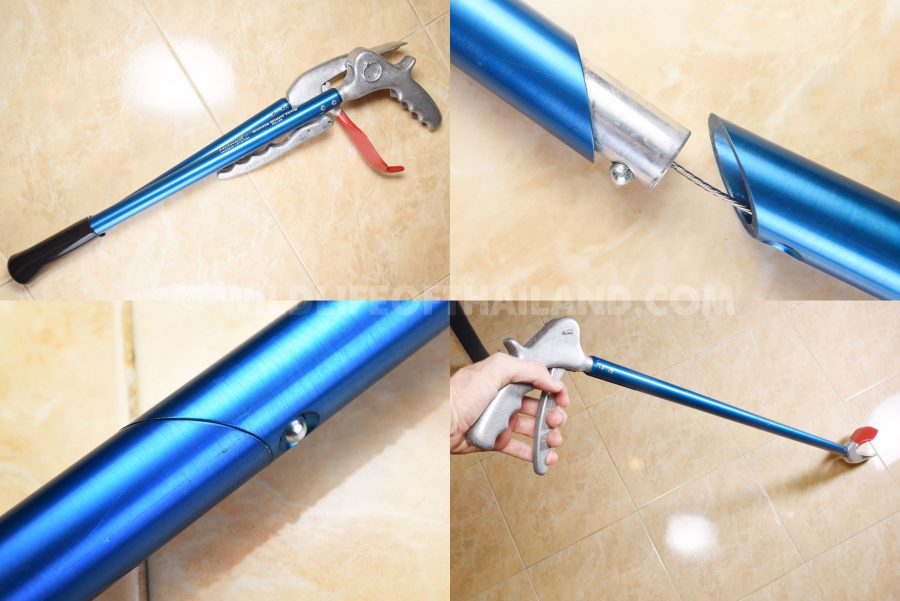 The collapsible tongs are easily assembled. But not so fast that it is ready in seconds to catch a fleeing snake.

Being collapsible makes it easier to carry around, though it is not a light-weight tool!
It is easily assembled, but when you are out in the field I guess you want it to be ready for use. You can not assemble it within a split second to go after a fleeing snake.

Testing in the field

Time to go field herping. And oh my, were we lucky! The first snake we came across was a Banded Krait, Bungarus fasciatus, and if that was not exciting enough, the second snake we found was a Many-banded Krait, Bungarus multicinctus which is the first and so far only record of this specis in Thailand! Finding two kraits in a row on one night is crazy. Finding a species that has never been found in this country before is just unbelievable!!
For the Bungarus fasciatus I used my newly received collapsible snake hook from the same producer, Midwest Tongs, of course I had to try my own ‘toy’ first before playing with my friend’s gentle giant tongs. But as I said, we got a second krait so for the Many-banded Krait we gave it a go with the tongs. And exactly for a species like this – the most venomous snake of Thailand – it is convenient to have such a tool. It made bagging the snake a piece of cake. 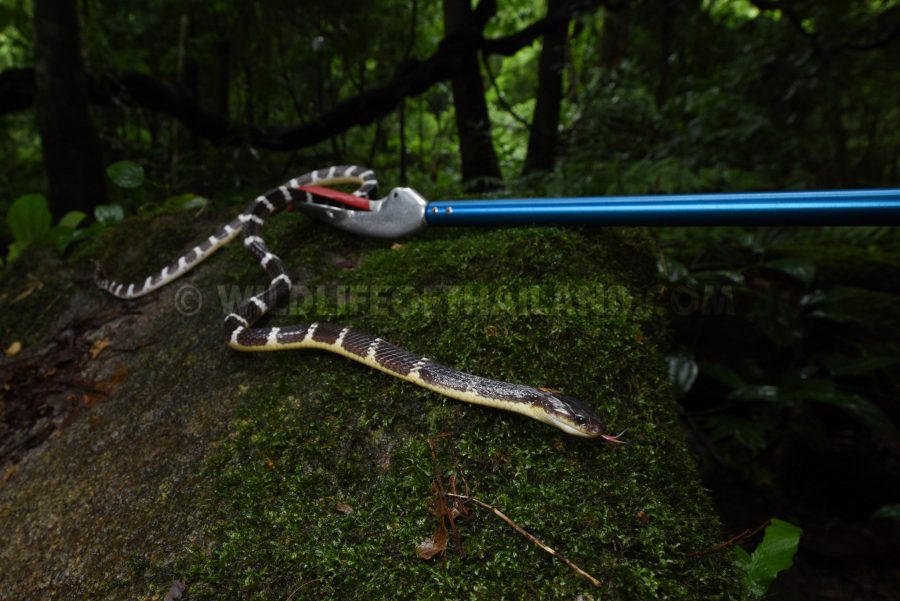 Using the gentle giant tongs on this Many-banded Krait went smoothly and seemed to cause little additional stress to the snake. The wide jaws really do their job!

The next morning we planned to photograph the Many-banded Krait. Despite the story of kraits being sluggish in daytime, this was not the case with this individual, so the tongs were put to the test.
The photo session was not easy as the Many-banded Krait had no intention to pose for even one second.
But during the session it became clear that grabbing the snake with the tongs was easy, and seemed to have little effect on the mood of the snake. It did not bash around when it was grabbed with the tongs. It just kept on moving in similar fashion as when it was set free. That is exactly how it should be.

I strongly hope that Midwest will stop producing the narrow grabbers and only offer these gentle giant tongs with wide jaws that much reduce stress on the animals. It costs a bit more, but if you care about snakes, you should go for the most humane option available.
Have I changed my mind? Sort of, though still I will not order a snake tong for myself, I stick to my snake hook.
All I do is field herping, I do not keep any snakes at home. For the few cases where a snake hook is not sufficient and only tongs would work, I just cry, let the snake get away and hope for another encounter in the future 😉 . But at least now I have seen that there are good tongs out there.

Having mentioned their name various times in this write-up, it probably looks like they paid me to write this, haha.
They did not, but for delivering such quality products they deserve a link. Also because I hope other people will ditch the old-fashioned snake tongs with narrow jaws, and upgrade to these more humane gentle giant tongs.
So here it is:
Midwest Tongs
www.tongs.com